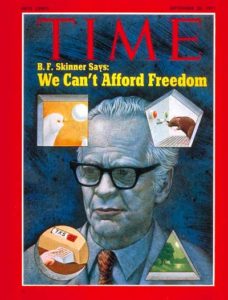 We’ve come a long way since renowned psychologist B.F. Skinner (1974) opined that animals are “conscious in the sense of being under stimulus control”.

Skinner’s view was not much of an advance from Descartes’ (1650) philosophy which stated animals cannot reason, do not feel pain and although they are living organic creatures, they are simply automata, like mechanical robots.

Until recently, anyone who deviated from conventional wisdom and suggested animals are thinking, feeling creatures was dismissed, and ridiculed, as being anthropomorphic.

Today there is a mountain of scientific studies and critiques fueling a revolution in the way we think about animal sentience.

Ironically, this revolution is not embraced by many traditional conservationists who are finding themselves falling behind in the wake of a “woke” discipline called “Compassionate Conservation.”

What, you might ask, is the difference between traditional and compassionate conservation?

Traditional Conservation attempts to protect species without taking into consideration the treatment and well-being of individual animals.

Compassionate Conservation attempts to protect the Earth’s biological diversity while taking into consideration the treatment and well-being of individual animals.

It is interesting to note, that both animal welfare, which focuses on individual animals, and environmentalism sprang into existence in the 1800’s – two branches, I contend, of the same tree.  The former born out of a concern for the suffering of individual animals, the latter out of a romantic determination to return nature to an Eden-like state.

Any time a new theory, teaching, or doctrine emerges in a field where dogma is sacrosanct, offense seems inevitable.  Hopefully, as the efficacy of compassionate conservation continues to be demonstrated around the world, in all manner of environments, division will be mitigated and we will recognize the remarkable time in which we live.  A time when compassion could conceivably unite the animal welfare and the environmental communities in a common mission to heal our planet.  We could learn about conservation, habitats, and ecosystems while helping individual animals in need.

If John Muir was correct, and “The clearest way into the [macro] Universe is through a [micro] forest wilderness.” – then perhaps the best way into healing our planet is through appreciating the individuals who inhabit it.