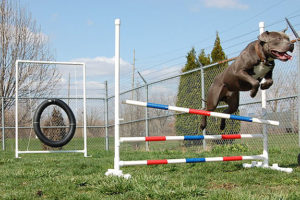 Imagine an animal shelter that is quiet and smells clean; where pets are stress and disease free; where dogs are led outside to eliminate, enjoy fresh air and exercise a minimum of 4 times each day; where adoptions into loving homes are permanent; where well-trained staff and volunteers are able to meet the needs of shelter pets and clients; and where the community generously supports shelter activities and programs.

In the enduring words of John Lennon, “You may say I’m a dreamer, but I’m not the only one.”

The dream is the Yavapai Humane Society “Enrichment Program” which implements shelter structures and husbandry practices designed to increase behavioral choices in a way that species-appropriate behaviors and abilities are encouraged, thus enhancing each animal’s overall welfare.

In other words, the YHS Enrichment Program is designed to bring out the best in our community’s homeless pets in an effort to make them more adoptable. This wonderful program directly reflects our community’s love and compassion for animals – and with one of the highest Live Release/Adoption Rates in the nation (97 percent) it is clear the program is working!

It is sad to see the negative consequences in shelters lacking an enrichment program. Animals become less adoptable over time because they become hyperactive, bored, anxious, and frustrated. They can lose housetraining skills, and may develop an uncontrolled exuberance at seeing people or withdraw and isolate themselves in fear. These outcomes diminish an animal’s quality of life and their chance at adoption. Thanks to the YHS Enrichment Program, pets learn and retain valuable skills and are happier and more adoptable.

One of the enrichment strategies employed was replacing the chain link fence dividing the kennels with solid dividers which created greater privacy for the dogs resulting in less anxiety, barrier aggression, and barking. The outcome of this one simple change was transformational, creating a feeling of security for perhaps the first time for some dogs and a quieter shelter for the public to visit.

Other YHS Enrichment initiatives include:

The Enrichment Program benefits the thousands of animals rescued by YHS each year. It reduces behavior problems and decreases stress induced illnesses – making YHS animals healthier, happier and more adoptable. It also provides our community an environment where everyone can be proud of the compassion, care and training we provide our soon to be adopted animals.

As John Lennon would say, “I hope someday you’ll join us…”

Ed Boks is the executive director of the Yavapai Humane Society.

In the 16th century North America contained 25-30 million buffalo. However, in the 19th century bison were hunted almost to extinction – with less than 100 remaining by the late 1880s. This mass destruction came with ease to hunters. When one bison is killed, the others gather around the fallen buffalo, which leads to the easy annihilation of large herds.

As the great herds began to wane William F. “Buffalo Bill” Cody, among others, spoke in favor of protecting bison because he feared the pressure on the species was too great. In 1874, President Ulysses S. Grant “pocket vetoed” a Federal bill to protect dwindling bison herds. In 1875, General Philip Sheridan pleaded to a joint session of Congress to slaughter the herds to deprive the Indians of their source of food. By 1884, the American Bison was close to extinction. END_OF_DOCUMENT_TOKEN_TO_BE_REPLACED 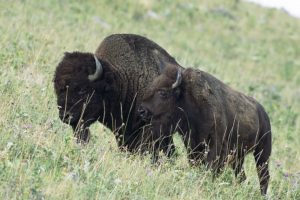 In the 16th century North America contained 25-30 million buffalo. However, in the 19th century bison were hunted almost to extinction – with less than 100 remaining by the late 1880s. This mass destruction came with ease to hunters. When one bison is killed, the others gather around the fallen buffalo, which leads to the easy annihilation of large herds.

As the great herds began to wane William F. “Buffalo Bill” Cody, among others, spoke in favor of protecting bison because he feared the pressure on the species was too great. In 1874, President Ulysses S. Grant “pocket vetoed” a Federal bill to protect dwindling bison herds. In 1875, General Philip Sheridan pleaded to a joint session of Congress to slaughter the herds to deprive the Indians of their source of food. By 1884, the American Bison was close to extinction.

In the effort to save this noble species a herd was brought to the Grand Canyon region in the early 1900s. The herd was managed from 1950 into the 1990s by the state of Arizona in the House Rock Wildlife Area (HRWA) in Kaibab National Forest.

During the late 1990s, the herd began migrating to the top of the Kaibab Plateau and into Grand Canyon National Park (GCNP). Today, few bison remain in HRWA preferring the environs of the Grand Canyon Park.

Some 400-600 bison live within the Park. The National Parks Service (NPS) contends the herd is impacting park resources, including water and vegetation – and they want to reduce the herd to 80-200 animals – using hunters.

Advocates for the use of lethal force include Senators John McCain and Jeff Flake, and Congressman Paul Gosar. Arizona Game & Fish Commission Chairman Kurt Davis says his agency won’t even consider a plan that doesn’t include killing, stating, “Any solution should embrace the most cost-effective and heritage-driven option of using citizen hunters to help manage the growing bison herd.”

“Cost-effective,” “heritage-driven” and “manage” is code for “bullets” “slaughter” and “kill” respectively.

Strangely, politicians seldom seem as concerned about the impact cattle have on our public lands. According to a 1997 EPA study, nearly one third of the prime top soil in the US has been lost over the last 200 years due to cattle grazing. Cattle are also considered one of the main sources of pollution in U.S. streams, and are frequently responsible for outbreaks of Giardia and Cryptosporidium.

In fact, bison grazing has been found to help cultivate the land, making it ripe for a diverse range of plants, whereas cattle eat through vegetation limiting the ecosystem’s ability to recover. Comparing cattle to bison is not meant to upset the cattle industry. But it does beg the question that with over 900,000 head of cattle impacting every corner of Arizona every day are we really willing to concede we don’t have the collective brainpower to humanely accommodate a few hundred bison without resorting to killing?

Congress has introduced a pair of bi-partisan bills meant to “protect” Park resources from further bison “damage” by “requiring” the Department of Interior and AZ Game and Fish to develop a plan to permit hunters to “assist in managing” the bison population.

The government’s approach to this “problem” brings to mind Maslow’s Golden Hammer (when all you have is a hammer every problem you encounter needs pounding).

Fortunately, there’s still time to propose humane, non-lethal solutions. NPS is granting the public until March 26 to weigh in. Perhaps, if enough of us ask state officials to consider life-affirming solutions we could begin to put our heritage-driven brutality behind us for good. Comments welcomed at https://parkplanning.nps.gov/commentForm.cfm?documentID=71123

Ed Boks is the executive director of the Yavapai Humane Society.

Mahatma Gandhi said it best, “The greatness of a nation and its moral progress can be judged by the way its animals are treated.” The same can be said of the states in a nation.

In fact, the greatness and moral progress of all 50 states can be traced through the years by the consistent strengthening of state laws against animal cruelty to include felony provisions. This moral and legal progress has been based on the growing understanding of the link between animal cruelty and violence against humans.

Understanding this link, the FBI now requires local law enforcement to track and report animal cruelty the same way homicide, arson and assault are tracked – as a Group A felony.

Why would Arizona legislators David Gowan and Brenda Barton work behind closed doors with corporate agriculture lobbyists to craft a bill (HB 2330) designed to repeal the few protections millions of animals have in Arizona?

HB 2330 is not an isolated attempt to repeal Arizona’s animal cruelty laws. Last year enough Arizona legislators supported a similar bill (HB 2150) that it would have been the law of the land today except for Governor Ducey’s veto.

Fortunately, this year’s coup against animal welfare may have died in the Agriculture, Water and Lands Committee when they wisely chose to not agendize HB 2330.

However, the bill could still be resurrected by the House Appropriations Committee this year or introduced in another permutation next year. Animal advocates must remain vigilant in a state where politicians seem strangely determined to weaken animal-cruelty laws.

Apart from some Arizona legislators, animal abuse is widely recognized and understood by law enforcement, public health officials and decent human beings everywhere to be part of a continuum of violence with serious implications for multiple victims and society as a whole.

While Gandhi drew our attention to the societal ramifications of how we treat animals, Immanuel Kant provided some insight into how we should judge politicians who deliberately put animals in harm’s way. “He who is cruel to animals becomes hard also in his dealings with men. We can judge the heart of a man by his treatment of animals.” This maxim serves as a reliable gauge for assessing the character of politicians who have the power to impact how animals, and people, are treated on a massive scale.

Sponsors and supporters of last year’s HB 2150 and this year’s HB 2330 have telegraphed their agenda to reverse Arizona’s moral progress by revoking protections animals in Arizona have benefited from for decades. They have exposed their intent to put the welfare of millions of animals at risk without any corresponding benefit or legitimate justification. They need to know this is not going unnoticed.

Refer to my Feb. 17 column, “Lawmakers target animals again” to understand the risk of cruelty that HB 2330 posed for millions of animals.