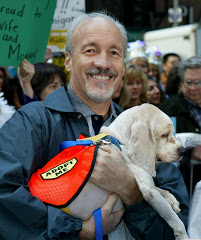 In 2009 LA Animal Services will celebrate its centennial, one hundred years of providing service to the pets and people of Los Angeles.

Animal care and control is perhaps the most misunderstood animal welfare organization in many communities. To better understand LA Animal Services, and animal control in general, it may be helpful to look through the lens of history at how these programs evolved over the past century.

During the first quarter of the 20th Century, most communities were rural and sparsely populated. Dogs and cats were valued for what they contributed to this rural lifestyle. Dogs, for the most part, were working animals earning their keep on a local farm or ranch, or they were used for hunting to help put dinner on the table. Cats, and some small dogs, were used as mousers to help keep small rodents and rats out of home, barn and business. Cats and dogs were permitted to run free.

By the third decade of the 20th Century, free roaming dogs resulted in a dog overpopulation problem, and with it came an increase in rabies.

The seriousness of rabies in the early 20th Century was brilliantly depicted in the American literary masterpiece, “To Kill A Mockingbird.” Atticus Finch, a Southern small town lawyer was called upon to shoot a rabid dog in the middle of a neighborhood street as residents watched trembling behind locked doors and windows. The context suggests Atticus had been called upon to dispatch rabid dogs before, which may have earned him the respectful moniker “one shot Atticus”.

This all too common scenario occurring across America motivated state legislators to establish rabies and animal control programs to ensure dogs were vaccinated against rabies and licensed. Cats were not included because they were not a significant vector for rabies in most parts of the country. Over time dog vaccination and licensing programs effectively reduced the incidence of rabies in dogs to the level that naturally occurs in cats, that is, rabies became equally rare in dogs.

So successful were these programs that it is easy to forget the terror the word “rabies” evoked in the heart’s of communities. The fact that scenes like the one depicted in “To Kill A Mockingbird” are a thing of the past is a tribute to animal control professionals. And today they do it without firing a shot! They do it by maintaining and enforcing successful rabies vaccination and licensing programs.

Most communities never enacted laws to control cats. In fact, a silly and erroneous notion was promoted that claimed cats are “free roaming animals” that don’t need to be regulated. An exploding feral cat population is the consequence of this short sightedness and today feral cats are a significant public concern.

While animal control programs focused narrowly on controlling rabies a striking societal change was occurring in the human/animal relationship.

Advancing to the 60’s we find many Americans starting to reject the conventional wisdom that pets are meant to be kept outdoors. I recall discussing this societal shift with my father. I was around ten years old. I had bought my first dog with money I saved from cutting lawns all summer.

My father was raised in a rural Michigan community. He explained that he also had a dog when he was a boy. His dog lived in a doghouse in the backyard. The idea of a dog in the home was as incomprehensible to him as keeping a dog outside was to me. “Dogs don’t belong in the house,” he told me. However, I persisted, and the dog was eventually permitted in the house, albeit, in the basement, where I spent many a night comforting him through the anxiety caused by his separation from mother and siblings. As the months and years passed, he eventually took his place under the kitchen table during meal times and at the foot of my bed at night.

All across the United States similar scenes were taking place. As communities continued to urbanize, dogs and cats found their way out of the barnyard workforce into our hearts, our homes, and for some of us, into our beds. Pets were no longer staff; they had become part of the family.

Unfortunately, many animal control programs did not keep pace with this societal change and continued to view themselves solely as rabies control organizations implementing catch and kill methodologies.

An urban dog population explosion in the 70’s caused cities and towns to refocus their animal control efforts to simply getting dogs off the street. Unfortunately, little thought was given to any long-range strategic solutions or to even what to do with all these animals after they were rescued from the streets.

One merely needs to tour the municipal dog pounds built across the United States during the last century to understand the catch and kill thinking of most community planners. These facilities were clearly designed to warehouse dogs until they were “disposed of”. As free roaming and feral cats became a problem, these “dog pounds” were enlisted to warehouse terrified cats as well.

Los Angeles is the first major city in the United States to officially, and financially, respond to its community’s desire for a humane animal control program. LA did this with a $160 million commitment to build state of the art animal care community centers to replace its dog pounds.

The new Centers have wide aisles, solar and radiant heating, cooling misters, veterinary and spay/neuter clinics, park benches for visitors, fountains and lush landscaping – a world away from the grim conditions of the old shelters, where animals could become so agitated or depressed that they seemed ill-tempered and, thus, “unadoptable” by old school animal control reckoning. By transforming our animal shelters into places of hope and life, instead of despair and doom, we are already experiencing a measurable increase in our adoption rates and consequently one of the most significant declines in LA’s long history of declining euthanasia rates.

In the nearly ten years since the City of Los Angeles officially embraced the “No-Kill” ethic, the kill rate has plummeted from over 60,000 to around 15,000. Still too many, to be sure, but there is no denying progress is being made.

What is the future of animal care and control in the United States? There must be as much an emphasis on humane, non-lethal animal care programs today as there was on rabies control programs in the past.

Dogs and cats running loose is a symptom of a dysfunctional community. The cause is irresponsible pet guardians. However, many municipalities contribute to this dysfunction by developing the most costly and ineffective response to the problem. That is, they ask their animal control programs to chase, impound, warehouse, kill and dispose of pets. To be responsive in today’s communities, animal care and control organizations must take the lead in implementing cost effective non-lethal (no-kill) strategies.

Strategies like LA’s Big Fix that provides $1.2 million worth of free or low cost spay/neuter for 45,000 pets belonging to residents on public assistance annually. Strategies like TNR (Trap/Neuter/Return) a feral cat program that is having a dramatic impact on solving neighborhood feral cat problems all across the United States. And of course, humane, inviting shelters that serve as pet adoption and community centers.

The 21st Century animal care and control must represent the most proactive, innovative programs. Programs designed to humanely solve the problems of irresponsible pet guardianship, not exacerbate them, which is what “catch and kill” methodologies do.

LA is already experiencing the long-term payoff of such programs. By continuing to work together we will soon see the day when euthanizing a healthy, adoptable animal is as rare as shooting a rabid dog in downtown Los Angeles.