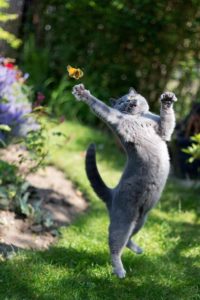 prepared a Draft Environmental Impact Report (EIR) to evaluate the potential environmental effects of the proposed Citywide Cat Program (proposed Project) that addresses free-roaming (feral or stray) cats in the City. The City is requesting input on the Draft EIR from public agencies, residents, and other interested project stakeholders.

Project Background: In 2006, the City’s Department of Animal Services began to implement a “trap, neuter, return” (TNR) policy and program for free-roaming cats. The City also distributed vouchers to be used for free-roaming cat spay or neuter surgeries, issued cat trapping permits, and otherwise provided support and referrals to community groups that engage in TNR programs. In 2008, the City was sued, and in 2010 the Los Angeles Superior Court issued an Injunction which prohibited the City from further implementing the TNR policy and program without completing an environmental review process in compliance with CEQA (Case No. BS115483). The City prepared a Mitigated Negative Declaration (MND) in 2013, but ultimately decided to modify the proposed Project and prepare an EIR. The scoping process for the EIR began in 2017.

Project Description: Under the proposed Project, the City would: Directly engage in or make available funds for the spay/neuter of free-roaming cats that may be returned to where they were found, relocated to a working cat program, or adopted; Make amendments to the City of Los Angeles Administrative Code (LAAC) to broaden the permitted use of Animal Sterilization Funds and to the City of Los Angeles Municipal Code (LAMC) regarding the definition of a cat kennel; Implement a modified trap, neuter, and return (TNR) program that includes facilitation of trapping, neutering, and returning, TNR-related community education and outreach and collaboration with TNR organizations, and use of incentives to encourage the capture, sterilization, and release of free-roaming cats, including to TNR groups who may return the cats to free-roaming status; Publish and implement program guidelines and ecological conservation measures; and Create a working cat program.

Project Objectives: Broadly stated, the purpose of the proposed Project is to assist in achieving the City’s no kill goal and support the City’s adoption of TNR as the preferred method of addressing the free-roaming cat population in the City. The objectives of the proposed Citywide Cat Program include: Facilitating spaying and neutering of cats in the City; Reducing the relative number of free-roaming cats in the City over time; Facilitating more public and community education on animal-related topics, including free-roaming cats; Training animal services center staff members on cat management programs and engage in collaborative efforts with local rescue groups to help respond to and address free-roaming cat issues; Further implement the City’s no-kill policy by reducing the rate of euthanasia of cats in City animal services centers; and Establishing TNR as the preferred policy to humanely address free-roaming cats.

Environmental Impacts: The analysis contained in the Draft EIR determined that the proposed Project would not result in any significant environmental impacts. No mitigation is required.

Public Review Period: The Draft EIR public review and comment period begins August 29, 2019 and ends on October 28, 2019. The Draft EIR is available online at the Bureau of Engineering website:  https://eng.lacity.org/citywide-cat-program-e1907610

Hard copies may also be viewed at the following locations:

Comments: Please send comments on the Draft EIR to:

Comments may also be submitted by e-mail to jan.green.rebstock@lacity.org. Please remember to:

Following the close of the comment period, the City will consider and prepare responses to the comments received and compile a Final EIR. The Final EIR will be posted online at the Bureau of Engineering website:  https://eng.lacity.org/citywide-cat-program-e1907610.

All responses to comments submitted on the DEIR by public agencies will be provided to those agencies at least 10 days prior to certification of the Final EIR. The Board of Animal Services Commissioners and City Council Committee(s) may consider and make recommendations to the Los Angeles City Council regarding the Final EIR and proposed Project. The Los Angeles City Council will make findings regarding the extent and nature of the environmental impacts as described in the Final EIR. The Final EIR will need to be certified by the City prior to making a decision to approve or deny the proposed Project. Public input is encouraged at all public meetings before the City.

More information on the value of TNR programs in your community can be found here: