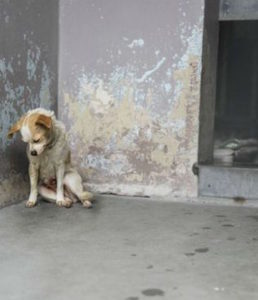 More than a policy and statistical objective, “no-kill” is a principle, an ethic, and once applied the practical consequences begin to fall into place. The principle is that animal shelters should apply the same criteria for deciding an animal’s fate that a loving pet guardian or conscientious veterinarian would apply. That is, healthy and treatable animals are not killed simply because of a lack of room or resources to care for them.

Killing animals for lack of space may be the quick, convenient and, at least from afar, the easy thing to do.  But I have never, in nearly 30 years in this field, heard anyone argue that it is the right thing to do.  After all, the creatures who fill our shelters can hardly be faulted for bringing trouble upon themselves. People who seek to excuse euthanasia in shelters often say we have to be “realistic.” But such realism is best directed at the sources of the problem and at the element of human responsibility..

There are the heart-breaking cruelty cases that bring so many animals to our doors.  On top of that, there are the thousands of dogs and cats shelters take in each year who are actually relinquished – turned in – even after years living with a family – like old furniture donated to charity.  And there are the orphaned, neonate puppies and kittens.  No one bothered to spay or neuter the parents, and so the offspring are born into the world homeless or unwanted. The general attitude is, “Let someone else deal with the problem,” and – hundreds of times a year – someone else does with a lethal injection.

Along with such failures in personal responsibility is a breakdown in social responsibility.  On the budget sheets, saving animals can seem to a certain mindset as being a lowly or trivial concern.  That’s an easy position to take, as long as you don’t have to be there when the problem gets “solved”.  If the people who brush off animal-welfare as “trivial” had to see the product of their priorities carried out – to witness for themselves how trusting the dogs are even when being led to their death, or how as they drift away they lick the hand or face of the person with the needle – I suspect they would see matters in a very different light, and would enthusiastically support life saving programs.

I can see rays of light.  There is a renewed community commitment to helping lost and homeless animals, and to swearing off euthanasia as a solution to pet overpopulation.

The “no-kill” ethic is a matter of taking responsibility, instead of excusing the problem or hiding its consequences.

No matter how you do the math, there are still too many creatures who have love and devotion to offer, but never get their chance.  And calling the practice euthanasia (as some prefer), instead of killing (as others prefer), doesn’t make it any kinder.

The practice of killing animals has never been anyone’s idea of an ideal solution – let alone anyone’s idea of giving “shelter” to creatures in need.  And, up close, the willful elimination of healthy animals with good years left is a sight to move the hardest heart.  It is time we as a community make this commitment: No animal that comes through our shelters will be killed out of convenience or a lack of space.  For every one of them, there is somewhere a kind and loving person or family, and it is our mission to bring them together.