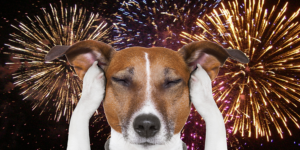 The month of July is chock-full of patriotic festivities that include outdoor celebrations, picnics, barbecues, and of course, fireworks. Before you pack up for the lake or outdoor arena, stadium or even your own front yard to enjoy the pyrotechnic delights of the holiday, be aware of your pets’ needs and fears.

Animal shelters experience a significant increase in the number of lost (and injured) pets after every July Fourth holiday.

Even pets who are normally calm and obedient can show unpredictable behavior when frightened.  Dogs and cats can become frightened or confused by the excitement and loud noises of the holiday.  I have been involved with rescuing terrified pets who had chewed through their tethers, jumped through plate glass windows or over fences, and escaped “secure” enclosures.

Dogs attempting to flee the frightening, and even painful noises of the fireworks may lose their sense of direction and run long distances risking injury or death as they dart in and out of traffic. This is one of the most dangerous times of year for your pets.

Up close, fireworks can burn or injure your pets, but even if they are far away, they still pose a unique danger to your companion animals.

To minimize the danger to your pets take these few simple steps before you set out to celebrate this Fourth of July:

If your pet does escape this holiday, visit your local shelter every day and post “Lost Dog” or “Lost Cat” signs and canvass surrounding neighborhoods. Place a yard sign in front of your house with a picture of your pet and your phone number. People who find lost pets will often walk or drive around the area attempting to find the owner. This Fourth of July can be the best ever if you take these simple precautions to keep your pets safe and happy. Let’s enjoy the festivities without having to worry about the family pet. 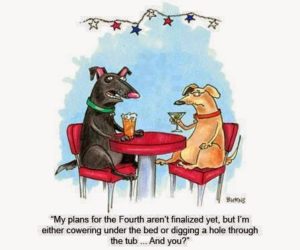 Every year every community decides to wreak massive mayhem among our companion animals.  If you’re a pet owner, you know I’m talking about the Fourth of July.  Fireworks terrify pets.

A terrified pet will spare no effort to escape the sound and fury of this raucous holiday.  Sounds that are just loud to us humans are actually painful to our pets. Pets don’t react to fireworks just because they are loud – they react because they are painful.

Pets who are normally calm and obedient can present unpredictable behavior when afflicted with the startling pain caused by the noise of fireworks.  Dogs and cats can become frightened or confused by the excitement and physical discomfort caused by the loud noises of the holiday.  In the days following the Fourth of July, animal shelters are filled with pets who have chewed through tethers, jumped through plate glass windows or over fences, and escaped “secure” enclosures in a hopeless attempt to escape the terror and pain of fireworks.

Dogs attempting to flee the frightening and hurtful noises of the fireworks can lose their sense of direction and run long distances, risking injury or death as they dart in and out of traffic.

Veterinary visits skyrocket following the Fourth of July and animal shelters  overflow with lost and bewildered pets.  The loud noises from traditional fireworks can cause heart problems, nausea, and even panic attacks in our pets.  Animal shelter employees and volunteers spend many days and hours following this holiday comforting traumatized pets while we try to find their “lost” owners.

As a pet-loving nation I wonder if we should consider sparing our four legged companions the unnecessary suffering that comes from exposing them to the noise of fireworks.  Before you say there is no possible way to celebrate this holiday without loud noises, consider Collecchio, Italy.

Collecchio’s town council enacted a law specifically designed to reduce the fear that fireworks cause their non-human populations. The law requires fireworks to be silent. They found that the silent fireworks significantly reduced the stress that loud fireworks cause animals – and not just pets, but wildlife and farm animals too.  A company called Setti Fireworks, located in Genova, Italy, makes silent explosives for the town of Collecchio – and they claim they can customize silent fireworks for any event – private or public.

Isn’t it time for America to follow this humane example to reduce the stress and pain fireworks cause our pets, wildlife and farm animals? 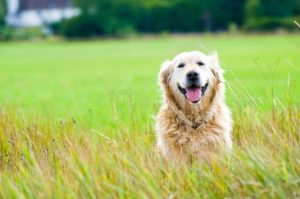 Your pet has a deadly enemy that comes in the form of several species of grassy weeds that grow rapidly during the winter/spring rains. When these grasses mature a seed forms at the top of the stalk resembling a fox tail.

Once foxtail grasses dry out, the seed detaches easily and sticks readily to clothing and fur. Foxtail seeds can enter a dog’s body in a variety of ways and once in they act like a fishhook burrowing inward; and because of tiny barbs, it cannot back out on its own.

It’s most common for a foxtail to enter a dog’s body through the skin, nose, ears, paws, genitals and eyes. One veterinarian reported that a foxtail found in a dog’s lung initially entered through the dog’s paw. Foxtails are tenacious and deadly. 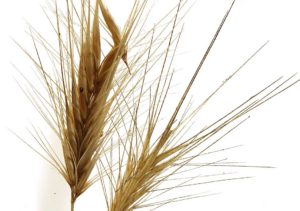 Foxtail seeds are relatively small, so detecting them after they enter a dog’s body can be difficult. Veterinarians usually rely on telltale symptoms such as head-shaking, paw licking, swellings on the body, or sudden and continuous sneezing. Foxtails in the ears, nose and eyes are serious and can ultimately be life-threatening if not treated promptly.

When a foxtail is inhaled and lodged in the nasal cavity, a dog will sneeze repeatedly and violently, sometimes even banging his nose on the floor in a futile attempt to dislodge the seed. It is often possible for a veterinarian to sedate the animal, locate the seed with an otoscope and remove it using special forceps if the animal is brought in when symptoms first appear.

If a foxtail is lodged in the paw or under the coat, a lump will usually form that is painful to touch. Depending on how deep the foxtail has traveled it can usually be removed surgically.

When a foxtail gets into a dog’s eye, the dog will paw at the eye. When you see a foxtail under the eyelid don’t try to remove it – you may not get it all. Keep your dog from pawing the eye and get him to a veterinarian immediately, preferably a veterinary ophthalmologist.

When your dog gets a foxtail in an ear, he will usually shake his head violently. Whenever you suspect a foxtail, get your dog to a veterinarian immediately. The best way to handle foxtail problems is to prevent them or treat them early.

Whenever possible avoid foxtail infested areas – especially during the dry season. But after a romp through tall, mature grass follow these steps:

Learn to recognize foxtails and avoid them! Foxtail danger in our parks, yards, empty lots and alleys can be greatly reduced by simply mowing the grass regularly, especially in the late spring. Mowing cuts off the foxtail grass before the deadly seed forms.

These are challenging times for government officials. In many communities the care of lost and homeless animals can be complicated by a host of competing priorities. When evaluating conflicting priorities it’s easy to look to the bottom line. When that happens, questions of compassion can be overlooked.

It’s easy to lose touch with the intrinsic value of animals when confronted with all the issues and problems involved with managing a city, town or county. It’s not difficult to understand how decision makers can feel human needs and wants are more important than animal needs and wants.

When this happens, it’s easy to reduce animal control to a simple equation of expense and expedience. We can fool ourselves into thinking we’re dealing with widgets rather than lives. It’s at this point that a community’s true character emerges.

Matthew Scully, senior speech writer for President George W. Bush and author of the book “Dominion,” put it this way: “We are called upon to treat animals with kindness, not because they have rights or power or some claim to equality, but because they don’t; because they all stand unequal and powerless before us. Animals are so easily overlooked, their interests so easily brushed aside. Whenever we humans enter their world, from our farms to the local animal shelter to the African savanna, we enter as lords of the earth bearing strange powers of terror and mercy.”

Terror or mercy; every community makes a choice.  Our community made a choice six years ago and has since accomplished what no other community has been able to achieve and sustain – an end to killing to control pet overpopulation. This was done despite higher priorities, greater needs and many human injustices. There will always be enough injustice and human suffering in the world to make the wrongs done to animals seem small and secondary, however, we err when we think of justice or kindness as finite qualities.

We compound wrongs within our character when we excuse the wrongs done to animals by saying more important wrongs are done to humans and we must concentrate on those alone. A wrong is a wrong, and when we shrug off little wrongs, we do grave harm to ourselves and others.

Each year municipalities renew their commitment to mercy or terror when they renew their animal control contract.  These contractual partnerships helped the quad-city region of Arizona become the safest and most humane community in the United States – for six consecutive years.

This was not always the case. Our community was once called “the most inhumane” in the nation by no less than the ASPCA. Together we transformed our community into a national model. We created a true humane society for ourselves, our families and our animals. By continuing to work together, we can and we will sustain this amazing success into the future.