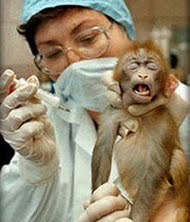 With a $32 billion budget, the National Institute of Health (NIH) is the world’s largest funder of biomedical research on animals. The NIH claims tax-funded animal experiments are about cures and vaccines, and comply with NIH’s mission “to extend healthy life and reduce the burdens of illness and disability.”

However, In Defense of Animals, an animal welfare organization whose mission is to end animal exploitation, cruelty and abuse recently reported on 2011’s Top 10 Most Ridiculous Animal Research projects.

These are real experiments funded by NIH, approved by federally mandated oversight committees and published in peer-reviewed journals. These experiments show how our tax dollars and animals’ lives are frivolously wasted on research that contributes nothing to medical progress and tells us nothing we care to know – or didn’t know already.  One wonders what happens in the experiments that don’t get published.

10: A National Institute of Arthritis and Musculoskeletal and Skin Diseases grant to study what happens when you inject rats with a substance that causes arthritis. The rats got arthritis.

9. Two National Institute of Mental Health grants to study anxiety. Scientists put rats in an open space with nowhere to hide and then did things to traumatize them. The rats became more anxious.

7. Three NIH grants to study the effect on the sex lives of hamsters when you put them on a diet. The hamsters were more interested in food than sex.

6. Two National Institute on Deafness and Other Communications Disorders grants to see what happens when you cut nerves that connect taste buds to the brain and leave the bitter-taste nerves intact. This involves slitting the throats of rats and puncturing their eardrums to reach the nerves. The rats learned to avoid bitter foods.

5. A K-12 career development grant to the Yerkes National Primate Research Center to see whether empathy makes chimpanzees more likely to catch a yawn from familiar chimpanzees than strangers. It does.

4. Two National Institute on Deafness and Other Communication Disorders grants to study alligator voices. The University of Utah implanted pressure sensors in the tracheas of young alligators and ran a cable through their throats, fixing it to their upper jaws with duct tape. They discovered alligators have two ways to change their voice frequency; whereas mammals have three.

3. Two National Institute of Mental Health grants to several laboratories to discover whether marmosets can be sexually aroused by a particular scent, e.g. lemons. They can.

2. Two National Institute on Drug Abuse grants to Albany Medical College to see how drug use affects musical preferences in rats. Rats who preferred Beethoven over Miles Davis were given cocaine with their less preferred music. The rats switched their preference to whichever music went with the cocaine.

1. Seven NIH grants to study stress on animals in vivisection laboratories. Researchers at Tulane National Primate Research Center found daily uncontrollable stress is inextricably part of an animal’s life in a laboratory, regardless of the experiments performed on them.

There is nothing more frightful than ignorance in action. Concerning such horrors, Dr. Charles Mayo, founder of the Mayo Clinic has purportedly said, “I abhor vivisection. It should be abolished. I know of no achievement through vivisection, no scientific discovery that could not have been obtained without such barbarism and cruelty. The whole thing is evil.” To which I can only say, “Amen.