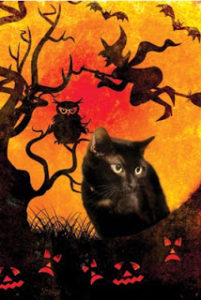 Each October I’m asked to debunk the myths and misinformation regarding black cats and Halloween.   Some suggest a moratorium on adopting black cats in October for fear they will be harmed – not understanding that in all the history of humane work no one has ever documented any connection between adopting black cats and those cats being harmed in any way.  Why then all the panic?  It seems much of the distress arises from a misunderstanding regarding the relationship between “witches” and black cats used in ritualistic sacrifices.  Witches would never harm their “familiars” who are supposed to be their eyes and ears in the spirit world.  To harm a familiar is to blind and deafen oneself.

This misunderstanding took on a twisted life of its own during the 1998 Halloween season when suspected Satanists were sought in nine states for “mutilations” that drew sensational media coverage and rewards up to $10,000.  That incident etched its way into the national consciousness.  However, few people remember that the investigators ultimately learned that these “mutilations” were the natural product of wildlife predation.

Each summer since then one community or another has suffered an emotional panic coinciding with the appearance of young coyotes from their dens and the first hunt of newly fledged raptors.  These panics increased in intensity with the public’s preoccupation with witches, ghouls, and goblins, but abruptly ended after Halloween – unlike cases of human sadism.

Police and humane officers are trained to investigate human-inflicted cruelty but often have little experience in predator behavior.  This sometimes leads to forensic evidence being misread in ways that incite witch-hunts.

Unlike human sadists, animal predators are quick and efficient, avoiding waste.  Their teeth and claws cut more cleanly than a knife and they don’t leave much blood behind.  When time permits, they consume the richest organs and leave the rest.

Coyotes typically attack small prey (such as cats) from behind and side, with a scissors-like jaw snap to the backbone that frequently cuts the victim in half.  When startled, they flee with the back half and whatever internal organs come along, leaving the head and fore-paws. These are examples of cases most often misread by investigators as ritualistic crimes.

When prey survives a first strike, coyotes and wild cats will inflict a skull-crunching bite to the head.  Several panics over alleged sadists drilling mysterious holes in the skulls of pets were resolved when investigators found the holes aligned with the incisors of wild predators.

Alleged “skinned alive” cases involving pets were actually coyotes and raptors mistaking pets for smaller prey. The predator holds on with teeth or claws while the victim runs causing a set of sharp, straight cuts investigators describe as “filets.”

Some trace black cat adoption moratoriums to early 20th Century New York Giants manager John McGraw.  McGraw was notoriously superstitious, so fans (mostly gamblers) tossed black cats in front of the Giants’ dugout to jinx him.  The American Baseball League quickly adopted a rule against continuing a game when an animal is on the field and many humane societies started prohibiting black cat adoptions during the World Series which often occurs around Halloween.