Kapparot or kaparos, meaning “atonements,” is a custom in which a chicken or money may be used.  Kapparot using chickens is practiced by some Jews shortly before Yom Kippur, the Jewish Day of Atonement.

The ritual begins with selections from Isaiah 11:9, Psalms 107:10, 14, and 17-21, and Job 33:23-24 being recited.  Then a rooster (for a man) or a hen (for a woman) is held above the person’s head and swung in a circle three times, while the following is spoken: “This is my exchange, my substitute, my atonement; this rooster (or hen) shall go to its death, but I shall go to a good, long life, and to peace.” The chicken is then slaughtered and may or may not be given to the poor for food.

Kapparot is not mentioned in the Torah or the Talmud.  It was first discussed by certain Jewish scholars in the ninth century who claimed that since the Hebrew word gever meant both “man” and “rooster,” punishment of the bird could be substituted for that of a human.  According to the Encyclopedia Judaica, other Jewish scholars strongly opposed kapparot.  The 13th-century scholar Rabbi Solomon ben Abraham Aderet considered kapparot a heathen superstition. Rabbi Joseph Caro called it a “foolish custom.” Others have pointed out that kapparot does not remove sins, and if it could, what would be the need for Yom Kippur, the Day of Atonement?

“Anyone who walks through the markets can see that the manner in which the chickens are held before the Kapparot is insufferable.  There is no veterinary supervision and no concern for the feelings of these poor creatures.” -Rabbi Gilad Kariv quoted in ynetnews.com 09/28/2006

The chickens are treated poorly in the days leading up to, during, and after the kapparot ceremony.  In the U.S., Israel and elsewhere where the ritual is performed, the birds are crammed in crates, where they are typically kept in their own excrement, without food, water or shelter, for six days before the “shlug kaparos” (“swinging of the chickens”) is performed on the eve of Yom Kippur.

In 2005 and 2006, the ASPCA in New York City confiscated hundreds of starving chickens abandoned in crates in a garage and a parking lot when the ceremony was over.  Chedva Vanderbrook, a board member of the Jerusalem SPCA, described a typical scene in Jerusalem: “The chickens are brought to the slaughter in cramped cages without water in the broiling sun.  Half of them die on the way.” 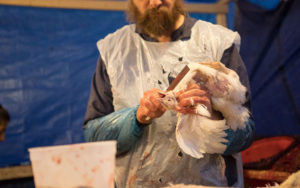 In 2006, Nazila Mahgerefteh described the events she watched take place in Los Angeles:  “For 6 days until Oct. 1, morning to night, in front of adults, children and babies, these pitiful birds are swung around the practitioner’s head. Then the vocal chords are slit so the chicken cannot scream in pain, and then, still alive, the writhing birds are thrown into a plastic trash bag while still walking and looking for a way out of the bag with the head clinging to a cut throat.”

How can kapparot be carried out without using chickens?

“It is absurd that people are asking for life by taking the life of another creature, especially when Kapparot can be done with money.” – Chedva Vanderbrook, Jerusalem Society for the Prevention of Cruelty to Animals, quoted in ynetnews.com 09/28/2006 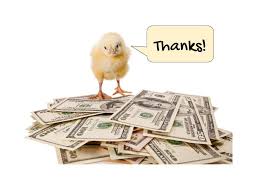 In kapparot ceremonies practiced by many Torah-observant Jews, money is put into a handkerchief which the person swings three times around his or her head while reciting: “This money shall go to charity, and I shall go to a good, long life, and to peace.” This ceremony, which is mentioned in many prayer books including the highly regarded Artscroll Siddur, preserves, even enhances, the sense of repentance and the tradition of charity, since no innocent creature has to suffer and die for a person’s misdeeds.

While the Jewish tradition is filled with concepts, prayers and actions during the Rosh Hashanah-Yom Kippur period that stress the importance of rachamim (compassion and sensitivity), the message of kapparot using chickens to those who take part and view it, including children, is a lesson of insensitivity to the feelings of other living creatures.

Respected Jewish author and educator, Dr. Richard Schwartz, has pointed out that using chickens for kapparot is inconsistent with the Torah prohibition of tsa’ar ba’alei chayim, which forbids the causing of unnecessary pain to living creatures.  He states that “using money rather than chickens is consistent with Judaism’s powerful teachings on compassion to animals” and that “at a season when we ask for God’s compassion, we should have compassion on God’s defenseless creatures.”

What should Jews who are concerned about the treatment of animals do?

Tomorrow, Tuesday, November 13th, the Ninth Circuit U.S. Court of Appeals in Pasadena will hear an argument on behalf of United Poultry Concerns in a case against Chabad of Irvine for unfair business practices in charging a fee to illegally kill and dispose of chickens for Kapparot. The district court ruled it was not a business practice.  That decision is being appealed.  The district court expressed no opinion on the underlying legality/illegality of the manner in which the chickens are killed and disposed.

Arguments are live streamed and can be watched here:
https://www.ca9.uscourts.gov/
If you’re interested in seeing the argument in person, the address is:
THE RICHARD H. CHAMBERS COURTHOUSE
125 SOUTH GRAND AVENUE,
PASADENA, CA 91105
The case is listed sixth on the docket and each case takes about a half hour, so this case may not be heard until 11:00 a.m. or so.
More information on kapparot can be found via this link.
Please consider making a life-saving donation to United Poultry Concerns; an organization committed to the compassionate and respectful treatment of domestic foul.