I recently posted the pictures to the right on Facebook with a personal observation that “compassion doesn’t have to be taught; but it can be unlearned.”

It wasn’t long before I was challenged by a friend who countered that “actually, compassion is part of EQ and as such is a learned behavior.”

This prompted me to do a little research.

I found that EQ (emotional quotient) is a measure of a person’s adequacy in such areas as self-awareness, empathy, and dealing sensitively with other people.

So, as I understand it, EQ is simply a measure of a person’s adequacy at being compassionate – but it does not preclude my notion that we are born compassionate.

In an earlier blog, I defined “compassion” as a deep awareness of the suffering experienced by another – linked to a desire to relieve it.  I believe compassion is more spirited than sympathy or empathy which I find to be fundamentally passive.  Whereas compassion gives rise to a zeal to actively alleviate another’s suffering.

Compassion does not simply care deeply about someone else’s suffering.  Compassion causes you to get involved.   Compassion manifests in the face of cruelty and moves you to say out loud “This is wrong” – while causing you to actually do something to end the suffering.

So, Is Compassion Natural or Learned?

With this definition of compassion in mind, I turned to the scientific community to see if science could restore my momentarily shaken faith in man-kind?

I was fortunate to find an article written by Emma Seppala entitled The Science of Compassion.  Seppala provided the following synopsis of the growing body of evidence regarding the inherent nature of compassion and the benefits compassion has on our health and well-being.

Science has found that at our core both humans and animals too, are compassionate.  Compassion has been found to be such a natural and automatic response that Dacher Keltner, coined the term “compassionate instinct” to describe the phenomenon.

Research by Jean Decety found that compassion is not limited to humans alone.  He research discovered that even rats will go out of their way to help a suffering rat out of its predicament.

Studies conducted by Michael Tomasello at the Max Planck Institute, in Germany, found that both chimpanzee and human infants engage in compassionate behavior – even overcoming barriers  to do so.  This behavior is manifest at an age to early to have been taught.

Pupil contraction is a measure of attention.  Tomasello says that his findings suggest infants don’t help alleviate the suffering of others because helping feels good, but because the actual easing of another’s suffering feels good.  Do you see the difference?

Interestingly, David Rand at Harvard University found that the first impulse of both adults and children is to help others.  His study is called “Natural Kindness“.

Francesca Righetti of VU University of Amsterdam, found that when humans are stressed our very first impulse is to help others – suggesting that the best way to alleviate our own pain is to help another.

However, a cautionary note is found in the research of Dale Miller.  Miller found that while it is true a stressed human’s first impulse is to help another, that impulse can be aborted when we are worried that others might think we are acting out of self-interest.  This suggests that while compassion is not learned, deviating from being kind is learned and can be adversely impacted by a perverse sense of peer pressure.

During my research I found this interesting fact: the term “survival of the fittest,” often attributed to Charles Darwin, was actually coined by the socialist, Herbert Spencer.  Spencer’s malignant intent was to use Darwin’s findings to justify class and race superiority.

This is further substantiated by the fact that in the 828 pages of Darwin’s The Descent of Man, he mentions “survival of the fittest” twice, but mentions love 95 times.  He writes about selfishness 12 times, but discusses moral sensitivity 92 times.

Strengthening the argument that compassion is inherent is the fact that compassion makes humans more attractive to potential mates.  A study examining traits valued in potential romantic partners found that men and women agree that “kindness” is among the most highly desirable traits. 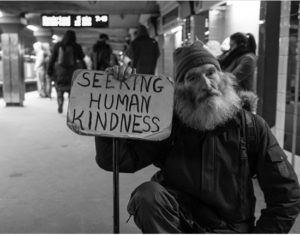 Whether you believe in biological evolution or not, “survival of the compassionate” is clearly evident in civilized societies (and dating sites).

According to Dr. Miller, if you are witnessing too little compassion in your world, you might want to remedy the situation by leading by example – or by finding some compassionate friends.