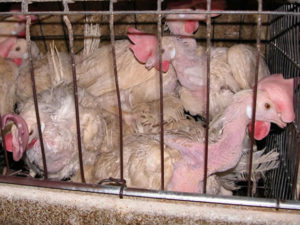 Californians for Humane Farms is an initiative sponsored by The Humane Society of the United States (HSUS), Farm Sanctuary and many other animal protection groups, family farmers, veterinarians and public health professionals. This coalition is waging a ballot initiative campaign in California to pass The Prevention of Farm Animal Cruelty Act in the November 2008 election.

Supporters of the initiative claim The Prevention of Farm Animal Cruelty Act asks for only the most basic needs for farm animals: merely the ability to turn around and extend their limbs. It is hard to imagine a more moderate initiative. HSUS explains the purpose of the measure is to prevent three methods of the allegedly most cruel and inhumane forms of extreme confinement in the world of animal agribusiness: veal crates, battery cages, and gestation crates. All three of these practices have already been legislated against in the European Union.

Proponents claim the Prevention of Farm Animal Cruelty Act will reduce the suffering of nearly 20 million animals confined in California factory farms. The measure will also prevent other out-of-state factory farm operators from setting up shop in our state with veal crates, battery cages, and gestation crates. Florida, Arizona, and Oregon have banned gestation crates, and Arizona has banned veal crates. Some major California food retailers are already moving away from supporting battery cages and veal and gestation crates.

Gestation crates are used to confine a sow for nearly her whole four-month pregnancy. Right before giving birth, she is moved from the gestation crate into a farrowing crate – a metal stall designed to separate her from her nursing piglets. After the piglets are weaned prematurely, the sow is re-impregnated and confined again in a gestation crate. Farrowing crates are exempted from this measure.

Nearly 800,000 Californians have already stepped up to sign a petition to put this seemingly modest proposal on the November ballot. The petition calls for all Californians to come together to end what many consider to be the cruelest confinement techniques used on factory farms – both in terms of the intensity and duration of confinement. Petitioners assert that keeping animals so restrictively crated that they can barely move for months on end is cruel and inhumane.