The New York Times reported today that the Humane Society of the United States, PetSmart Charities and the Smithsonian Conservation Biology Institute is launching a $1.5 million, three-year plan to count all the stray, feral and pet cats living in Washington D.C.

The plan is called D.C. Cat Count; and it is a highly technological endeavor. As many as 60 camera traps will record images of outdoor cats. A smartphone app, (still in development), will allow anyone in D.C. to share pictures of feral and/or pet cats in an effort to build a comprehensive library of all the cats living in the District.

Is there a need for this?

The three categories of animals dying in the largest numbers in most shelters throughout the United States are feral cats, pit bulls/pit bull mixes, and Chihuahuas.

The need for a baseline count

All spay/neuter programs, including Trap/Neuter/Return (TNR), should be required to produce measurable results to warrant continued support and funding.  The only meaningful measure of success (or failure) depends on knowing the baseline population against which you can quantify the effectiveness of your efforts.

It may not be necessary to spend $1.5 million dollars over three-years to determine Washington’s cat population.  Unbeknownst by many in animal welfare, a formula for determining feral cat populations already exists.

In a study titled, The Birth and Death Rate Estimates of Cats and Dogs in U.S. Households and Related Factors, published in 2005 in volume 7.4 of the Journal of Applied Animal Welfare Science a useful formula for calculating feral cat populations emerged.  The study was published by John C. New Jr. and William Kelch of the University of Tennessee, Jennifer Hutchison of the Australian Department of Agriculture, Fisheries and Forestry, Mo Salman and Mike King of Colorado State University, Janet Scarlett of Cornell University, and Philip Kass of the University of California at Davis.

The formula evolved from a 1996 survey of 7,399 U.S. households which found a crude birth rate of about 11.2 kittens and an attrition/death rate of 11.3 cats per 100 cats in households – meaning cat births in households nearly equals attrition.

Where does the surplus come from?

It was also discovered that the number of feral/stray cats moving into homes and shelters was approximately equal to the net growth in the household population plus the number of cats killed in shelters.

Let me give you an example how this formula can be applied to a No-Kill initiative. In the Los Angeles No-Kill Plan I submitted to Mayor Villaraigosa in 2010, I identified an area in South LA where spay/neuter efforts could be targeted.

The plan used SLA shelter data from 2008.  In that year, 3,917 cats were impounded from the targeted area and 2,212 of those impounded cats were euthanized or died. The remaining 1,705 cats were adopted.

According to the Los Angeles Planning and Demographic Research Unit, this targeted area had an estimated 1.25 million people living in 397,433 households.  According to an AVMA formula for determining the number of pet cats (.324 x number of households) this area had 128,768 cat-keeping households, with a total of 283,290 cats among them.

Applying the aforementioned (Eureka) formula, we can estimate a mortality rate in 2008 of 11% of the 283,290 cats – which equaled the number of cat births – which means there was a net self-replacement of about 31,163 cats in the targeted area in 2008.

Applying AVMA’s formula for the U.S. norm for pet cat populations from 1988 to 2008, we estimate the Los Angeles pet cat population increased at about 1% per year – meaning the net cat acquisitions in the targeted area exceeded attrition by about 2,850 cats per year, beyond births.

SLA cat adoptions included impounded feral-born kittens and tame stray cats and kittens.  The annual adjustment to the feral/stray population included 1705 cats adopted by SLA + 824 placed by other sources + 2,103 killed = for a total of 4,632 cats.  Assuming each cat had a mother, a father, and at least one surviving sibling, a crude estimate for the feral/stray cat population in the targeted area in 2008 was 13,896.  (A + B x 3 – A = feral cat population)

Leonardo Fibonacci, considered the greatest European mathematician of the middle ages (born in Pisa, Italy about 1175 AD), developed a formula for calculating agriculture productivity.  His formula was refined by Pasteur to predict 70% of a susceptible population has to be vaccinated to prevent an epidemic. Fibonacci’s 70% Rule is recognized by World Health Organization and Center for Disease Control.

If we think of spay/neuter as inoculating feral cats to prevent pregnancy, then according to the Fibonacci Rule, 70% of all feral cats must be sterilized before the successful breeding encounters of the remaining 30% are reduced to a rate sufficient to simply replace normal attrition. This means that starting in 2008, we needed a plan to sterilize 9,927 feral/stray cats annually just to stabilize the feral/stray cat population in this one targeted area.

Meaningful and sustained reductions could only have occurred if this rate was exceeded. 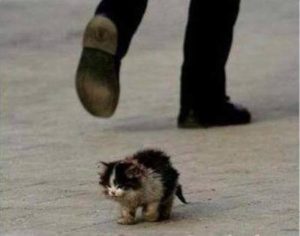 It is now 2018 – and a reworking of these numbers today will undoubtedly show we failed the animals in this neighborhood.  It is my hope for LA, as well as Washington D.C. and the nation, that we will strategically apply this knowledge to our feral cat spay/neuter strategies and programs.  Only then will we make a meaningful and measurable impact on our feral cat populations and end the killing of these animals.