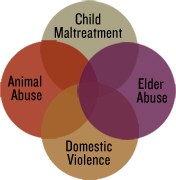 A great deal is known regarding the link between animal abuse and violence against humans.  In fact, law enforcement now tracks animal abuse alongside felonies like arson, burglary, assault, and homicide because it is thought that animal abuse may be a precursor to greater crimes including murder and serial killing.

A new study published in the Archives of Disease in Childhood may help pull back the curtain even further into helping us understand where the inclination for cruelty originates in the first place.

For instance, the study found that children who abuse animals were up to three times more likely to have been abused themselves.

The research found that up to 44 percent of children engage in animal abuse.  The majority of these cases involve very young children who “outgrow” this behavior by age 10.  These cases are attributed to “an extension of exploratory behavior” associated with curiosity.

However, the study found that when a child older than 10 commits animal abuse it can suggest the child had been the victim of abuse.

According to the study, younger children were more likely to engage in animal abuse than older children, but this behavior markedly decreased after the age of 10.

It was also found that girls are less likely than boys to abuse animals, but when they do, it is because they had likely been victimized by childhood abuse.

A most disturbing finding in this age of rampant media violence is that children who witness violence were three times more likely to abuse animals.

The researchers noted that the association of physical abuse and animal abuse was not “symmetrical.”  Only 1 in 5 children who were abused went on to abuse animals, whereas almost half of the children who were cruel to animals had been abused.

Animal abuse is defined in the study as “socially unacceptable behavior that intentionally causes unnecessary pain, suffering or distress to and/or death of an animal.”

Researchers state that “it is difficult to ascertain the prevalence of animal abuse” and they are even debating which animals should be included in their definition.

However, the study concluded that with more research we could someday understand the psychological cause for all the different types of animal abuses – and hopefully intervene before anyone is hurt.