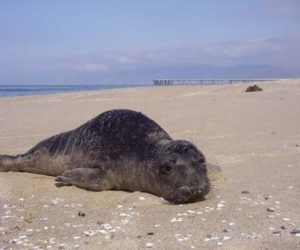 Marine mammals stranded on beaches are expected to increase over the next 3 to 4 months. One sensitive location for migratory sea birds and marine mammal strandings is the North Channel area in Venice/Marina Del Rey.

Lifeguards have reported as many as 50 free roaming dogs at any one time in this area. Free roaming dogs pose a significant risk to the health and safety of these animals. All Angelenos are reminded they must comply with the City’s Leash Law. LA Animal Services is increasing patrols in the Venice Beach area and will cite leash law violators.

Recently a reported hypothermic seal attempting to beach at the North Channel area was forced to retreat into the ocean by over 20 free roaming dogs. Rescue efforts were thwarted by citizens who allow their dogs to run free in violation of the leash law.

Two years ago, dogs prevented a domoic sea lion from beaching, chasing her into the water each time she tried. The animal ultimately drowned. Domoic causes seizures and disorientation, if a sea lion is not allowed to beach, it will most likely drown.

Marine Animal Rescue has rescued over 50 marine mammals so far in 2008, and this number is inceasing weekly.

The majority of the birds rescued are Oiled Grebe’s. Grebe’s hips are placed so far back on their body that they cannot move well on land and become easy targets for playful or aggressive dogs. Harbor Seals and Elephant Seals cannot climb well which explains why these animals are seldom seen on the rocks; they need the beach.

Dogs are susceptible to diseases (Leptospirosis or Bruceloss) when they come in contact with Sea Lions. Sea Lions have been known to inflict fatal bites to dogs.